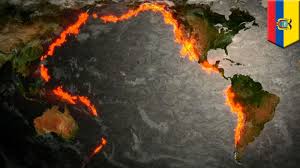 3. Only 5% of the world’s oceans have been explored. In fact, scientists have developed better maps of Mars than we currently have of the ocean floor. While there are hundreds of thousands of known marine life forms, there are many that are yet to be discovered, some scientists suggest that there could actually be millions of marine life forms out there.

4. The ocean is basically an inverted version of land. Below the ocean surface you can find underwater lakes, waterfalls and even upside-down lakes! (Check out this video to see!)